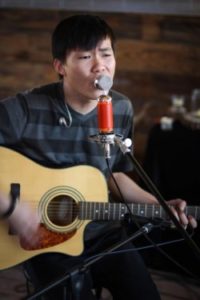 Since arriving on the campus of Southwestern College, Woon has immersed himself in activities and projects; he excels in photography, journalism, and worship outreach.
Woon came to Southwestern from Malaysia and was awarded a Bishop Scholarship which has helped pay his tuition.  The scholarship offered by the school changes from year to year, but represents one of the college’s most generous scholarships. The scholarship award also makes the student available for additional funds from the Institute for Discipleship. These funds are in addition to the scholarship and are need based.

“I came to Southwestern to study communications not knowing what communication studies were all about,” Woon says.  “I stepped into my first journalism class with Stacy Sparks (associate professor of journalism), not knowing anything about journalism and started to learn.  I like to learn new things. And then later on she invited to me to be on the newspaper staff (The Collegian) and I began to really appreciate journalism.  I work now a lot in the online area, social media, and pushing content.”

Woon has been involved heavily with worship outreach and chapel at Southwestern.  He has performed numerous times with the worship outreach team Selah.  He has now moved to a more behind the scenes role of producing music.

“To me the true joy comes when I am able to capture the essence of worship on an mp3 file and a student then can listen to it in their car or on their iPod,” Woon says.

Chapel at Southwestern has been a valuable experience for Woon.

“For me, I generally relate to people through Christ,” Woon says.  “That is how I find community and support.  (Southwestern College campus minister) Ashlee Alley has always been there for me when I need help or support.  The people in chapel are great and were especially important to me my first few weeks here.”

Woon’s connections at Southwestern led him to a valuable internship during 2012 when he spent the summer as an intern for “The Upper Room” and lived in Nashville, Tenn.  “The Upper Room” is a global ministry dedicated to supporting the spiritual formation of Christians seeking to know and experience God more fully. From its beginnings as a daily devotional guide, “The Upper Room” has grown to include publications, programs, prayer support, and other resources to help believers of all ages and denominations move to a deeper level of faith and service.

“Connections, it is all about connections,” Woon says.  “If you know how to use these resources at Southwestern, it can happen for you.  I told Martin Rude (director of outreach ministry) and Steve Wilke (vice president for planning and new programs) that ‘hey, I need an internship’ and the idea was initially to get an internship at a recording studio which is what I am really passionate about.  Steve said that his sister, Sarah, is spearheading ‘The Upper Room’ publishing house and he encouraged me to do a dual internship.  Everything just fell into place and I got a great experience.”

Woon, who is on schedule to graduate in December, is now planning on going on tour with Rude, former Moundbuilder Josh Melcher, and current SC students. They will feature music from their newly finished worship album, “No Secrets.”  At the end of January, they will be leading a weekend event in Houston and then in May tour to Jakarta, Singapore, and Malaysia.

“I grew up in Southeast Asia and I am looking forward to sharing our music,” Woon says.

“The best part of a small college is if students know how to maximize the experience, they will get a lot out of it,” Woon says.