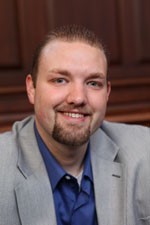 Dr. Jacob L. Goodson received his Ph.D. from the University of Virginia in 2010.  He specializes in American philosophy, modern philosophy, and the philosophy of religion.  He writes on topics such as the ethics of baseball, the moral treatment of animals, and the philosophy of prayer and prophecy.  Goodson has an essay coming out this year titled “The Ethics of Counter-Insurgency in The Wire,” which analyzes the characters of the popular HBO television series.  He enjoys discussing philosophical and theological issues with students, as well as watching the Chicago Cubs play baseball every summer.  He also likes to play racquetball and spend time with his wife, Angela, and two daughters, Sophia and Seraphina.

Matthew Sigler is the Institute for Discipleship visiting scholar for the 2013-14 academic year.  Matt comes to us from Boston University where he focused in liturgical studies. He is a graduate of Huntingdon College and has served as a youth minister and music minister for three years in a United Methodist church plant, as well as teaching as an adjunct professor at Seattle Pacific University.