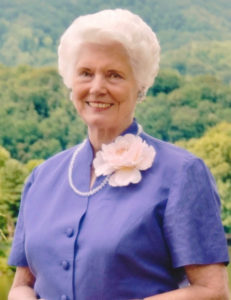 Julia Kitchens Wilke was born on July 28, 1932, in Texarkana, Texas, the daughter of Chester Kitchens, a pediatrician, and his wife Edith. She was raised to love the Methodist church, and she relished memorizing Bible verses and grew in her faith in the youth group.

She met her future husband, Richard (Dick) B. Wilke, while attending Southern Methodist University in Dallas. After she graduated with a degree in elementary education, they were married on June 20, 1953, in Julia’s family church in Texarkana, Ark. The couple moved to New Haven, Conn., where Julia taught elementary school while Dick studied at Yale Divinity School. She then joined Dick in his native Kansas and became a full partner in his Methodist ministry. Her gift was being able to see a need and then fill it. During Dick’s pastorates in Scandia, Salina, Winfield, and Wichita, she was an active church volunteer and leader, singing in choirs and teaching both children’s and adult Sunday school classes. At First UMC Wichita, she was instrumental in helping to turn around declining numbers through long-term Bible study.

At the same time, Julia also was making a home for her family, raising two sons and two daughters with equal parts love, faith, wisdom, and humor.

In 1984, Julia and Dick moved to Little Rock, Ark., where Dick served as bishop for 12 years. During that time, they co-wrote the four-part Disciple Bible Study series, a United Methodist Publishing House curriculum that has been completed by millions since its introduction in 1986. Over the years, Dick and Julia traveled the world as ambassadors for Disciple, which has been translated into several languages.

After retiring in 1996, Julia and Dick moved to Winfield, where Dick has served as bishop in residence at Southwestern College. In 2003, the college named its Institute for Discipleship in their honor. Julia was a member of PEO, and First UMC Winfield’s Kum-N-E-Wa Sunday school class and Wednesday morning Bible study.

Julia placed her faith and her family at the center of her life, and she drew an ever-widening circle to her with her vibrant spirit, her playful sense of humor, and her boundless ability to love.

with thanks to Nancy Kruh for providing this obituary

To know more about Julia Wilke’s life, explore some of the remembrances written by those close to here.