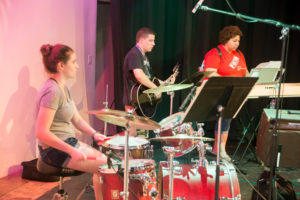 It’s not every day that summer campers get a chance to both gain experience leading worship and professionally record music, but that’s precisely what high school campers did at Southwestern College’s annual Amp It Up worship band camp.

Amp It Up is for students who want to use their musical talents to lead worship. This year, 29 students attended the 5-day camp May 26-30, 2016. In partnership with adult mentors and college-age camp counselors – all worship leaders themselves – students formed bands and experienced practicing and performing together as a group.

Some campers who had attended Amp It Up in past years returned this year, and said they enjoyed gaining experience working in a team and having the chance to continue to learn from skilled musicians. Another perk was that camp bands recorded their versions of popular Christian songs and received professionally mixed and mastered recordings of their performance.

“It’s really fun to work something up as a team and then get the chance to record it. Not a lot of people get to go through that recording process,” said Emma Bathurst, who attends Emmanuel UMC in Abilene, Kansas. 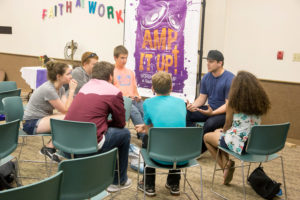 Not only did campers learn from college-age and adult mentors, they also had the opportunity to hear from Nashville-based Christian recording artist Mark Schultz. Schultz, who is originally from Colby, Kansas, and his band members spoke about their experiences as musicians and the lessons they’d learned along the way, then broke out into small workshop groups to share tips and techniques with campers learning their particular instruments. The students appreciated the individualized attention and focus.

“I’m part of the adult worship team at my church, and I’m one of only two pianists. So instead of just doing your same, day-to-day thing, it’s good to have the experience of talking to other keyboard players and get some insights on what they do to get a different perspective so you know how to push yourself,” said Bathurst.

While in Winfield, Schultz and his band performed a concert to a large crowd in Richardson Auditorium on the Southwestern campus. Amp It Up campers had front-row seats, and during his concert Schultz lifted the students up as an example young people who are actively pursuing their faith and learning skills to help share that faith with others.

That’s exactly how camp attendee Brooke Barnes, from Texas, wants to use what she learned at the camp. “Music was how I found God, so that’s how I want to use my gifts.”

Next year’s Amp It Up band camp is scheduled for June 1-5, 2017. More information can be found on the camp page on the Southwestern College website and on the Institute for Discipleship website.