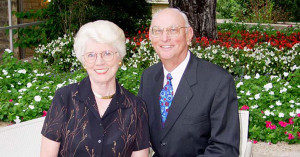 DISCIPLE Bible Study began in 1986 and was like a 5th child in the Wilke family – labor-intensive and sometimes quite demanding! But over time, it became clear that DISCIPLE was making a positive contribution to many around the world.

DISCIPLE’s essential elements of Bible study and small group discussion drew upon the characteristics of both the early Christian Church and Methodism. DISCIPLE also had qualities of my parents’ practical ministry, including a focus on ease of accessibility and inclusion of everyone into the study of the Bible. My folks were very interested in people growing in both their love for Jesus and in the effectiveness of their ministry.

The founding of the Institute

After writing the final DISCIPLE manual, my parents looked for a new way to pursue their passion for these elements of Christian discipleship.  They had relocated to Winfield, Kansas, and they wanted to pour their energy into Southwestern College, the United Methodist college in town where my dad was serving as Bishop in Residence. 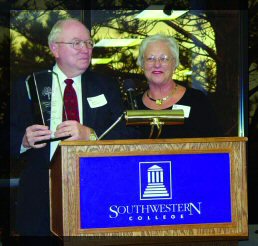 Bob and Beverly Wilke Dockhorn accept an award in recognition of their contribution at the renaming ceremony in 2003.

On April 20, 2001 – the same year the final DISCIPLE manual was published – the Board of Trustees of Southwestern College founded the Institute for Discipleship as an offshoot of the college.  The Institute, which focuses on equipping laity and clergy for effective living and ministry, provided a place in which my parents could continue several of their ministry interests in ways that strengthened both the Church and the college.

The lead gift for the IFD’s $1,000,000 endowment was made through a donation of some land to the school from my dad and his sister Beverly Dockhorn.  On April 12th, 2003, the Trustees of the college voted to rename the IFD the ‘Richard and Julia Wilke Institute for Discipleship’ in recognition of that initial gift and in honor of their contribution to the Institute.

First programs and the creation of BeADisciple

The mission of the Institute grew with different persons and opportunities. The Bishop Scholarship, which actually preceded the founding of the Institute, came out of my parents’ global Methodist relationships and a desire to help Methodist youth from other countries gain a college degree. Other early programs related to DISCIPLE Bible study facilitators and continuing education for pastors, which my dad initiated alongside Steve Rankin.  Rankin, who was the chair of the philosophy and religious studies department, began a pastoral studies major at the college in 2000. However, it quickly became clear that being an on-ground program posed logistical challenges of those in western Kansas wishing to participate. To solve this problem, this degree became the first the college offered online.

Having an online classroom infrastructure in place led to the creation of BeADisciple, which has become the Institute’s largest program.  BeADisciple utilizes Southwestern College’s online learning software to create and host continuing education courses for laity and clergy to enhance their ministry and discipleship. The factors that guide the growth and direction of BeADisciple are the same as those which, I believe, led to the success of Disciple: education with challenging content and helpful facilitators that is easily accessible and taught in a small group setting.  BeADisciple’s use of modern communication tools is also a natural extension to my folks’ ministry – Dad had a radio show in the 60’s, a TV ministry in the 70’s and 80’s, and video production with Disciple in the following years.

Moving into the future

The Institute continues to create programs to support clergy and lay people in their discipleship and ministry growth, and has added an emphasis in supporting young people in their call discernment process.

On the 30th anniversary of Disciple and the 15th anniversary of the Institute, it is good to know that God continues to call folks of all ages to come and follow Jesus and to see these efforts flourish in the building of the Kingdom.